The Mountain
A very small nitpick, but I thought Gregor Clegane should have been in more misery from Prince Oberyn's poison. They skipped the part where he was in agony for ages. His "death" was slow and painful. Justice served. Karma. Would have liked to have seen more of that in the show.

Brienne vs The Hound
These two don't meet in the books. Brienne of Tarth is my favorite female character. The Hound is my favorite male character. So having the two of them face off in a battle to the death was very heartbreaking for me to watch. I love Rory McCann's portrayal of The Hound and I guess I was hoping that the show would deviate from the books and keep him around. I can't really complain though, because he was around in the show longer than the books. A part of me just wishes he would be around forever. But I have a feeling that we readers and watchers of the show haven't seen the last of him yet. *cough* Gravedigger *cough*

I love how wonderful Brienne is. I'm sure that over time when I stop mourning The Hound's departure from the show, I'll be grateful that it was Brienne because honestly, it just makes her all that more bad ass.

Arya
Not really a nitpick, just so happy to have the Valar Morghulis/Valar Dohaeris boat scene. Braavos, here she comes!

Jojen Reed
I wasn't quite ready to see Jojen go. I know he predicted it, I know it was coming. Pretty sure he's still alive in the books. He was just so adorable and it was heartbreaking watching Meera lose her brother. So many feels, man.

The Children of The Forest
Love that we finally got to see one! I assume that the one we saw last night was Leaf! She was gorgeous! I can't wait to see more of this awesome race! They have the appearance of children but I believe are like a thousand years old or more? Leaf was one of the few that could speak the common tongue.

Tysha
The more I think about this, the more I like the change in the show. In the books, Jaime tells Tyrion about Tysha. She was Tyrion's wife long ago. She was never a whore, it was all a lie staged by Tywin. He forced Jaime to participate in the lie. This angers Tyrion and he tells Jaime he did kill Joffrey to hurt him back. I'm glad they left that out in the show because I love Jaime and Tyrion's brotherly love thing going on. We really need to see something positive come from the Lannisters because face it, most of them are asshats. It also helps explain his attachment to Shae even more, as she did have a greater role in the show than she did in the books, imo.

Tywin
This doodle of mine sums it up. The only thing I hoped for was that he would be on the toilet like he had in the books. Was happy. :)
[Doodle] 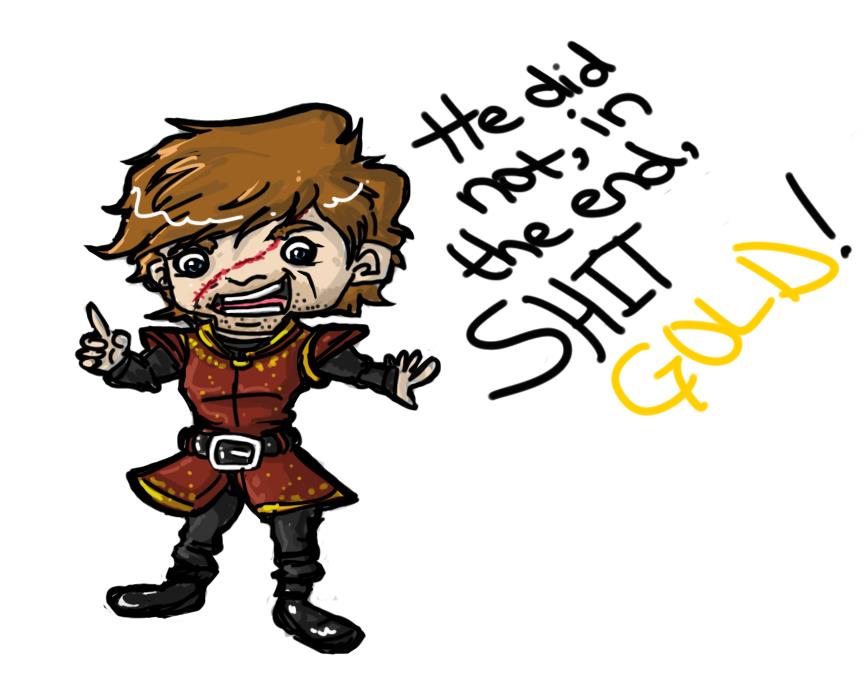 I guess my final nitpick would be that there was no Lady Stoneheart appearance this season. I think many of us were looking forward to the addition of this character, or the re-addition as it would be. ;)

Overall though, I was very very very very happy with it. I hope George RR Martin is too! I know when we create projects we love, they become our babies. Sometimes it can hurt to see the babies change, sometimes change is actually a good thing. I just hope he's happy with their vision of his baby. I know I am!

Keep up the good work, George!
You too, HBO!